The French Mediterranean coast (Mittelmeerküstenfront) did not receive the same treatment as the Neue Westwall, which was erected along the coasts from Norway all the way down to the south of France.

One of the reasons was because of the fact that the coast during the war was devided in a German and Italian part. The German sector took part in the construction programmes, the Italian part did not. Only in the end of 1943 the Germans had gained full control over the entire French Mediterranean coast, and increased their building capacity from that point on. Even though the affords increased, the important armoured turrets and other steel parts for the bunkers remained not available for this region, and the majority of the fortifications remained constructed in a lighter degree.

Because of this and other reasons the Mediterranean coastal front was not shaped in the way that it’s counterpart was on the other side of France. Despite the difference between both coastal regions, the Südwall as some call it, is still very interesting to visit. From the Spanish border up to the border with Italy the coast was scattered with fortifications; we highlight the use tank-turrets on many positions which seemed to be quite common in this region.

Furthermore the Marseille area, which was a Defensive Area, is a highlight because of it’s role as a major port during the War. From the harbour submarines controlled the Mediterranean, the massive bunker build here to protect the so called U-boats, still remains. At Istres a big airfield was build with the role as Fliegerhorst, erected with all the necessary to house heavy bombers and fighter aircrafts.

In general the ‘Südwall’ can be highlighted as being fortified with camouflage, using the dry and rocky looks to let the bunkers blend in with the landscape. 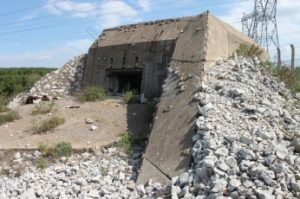