This website originally got it’s name from this German term. It refers to a construction strength of fortifications, using concrete reinforced with steel. Designed to be bombproof with outer walls and covers of a minimum of 2 meters thickness.

For practical reasons this website only discribes the German fortifications and other structures, build during WWII in Norway, Denmark, Germany, Holland, Belgium and France. German constructions in Italy, Greece, Bulgaria, Romania and Poland for example, are kept out.

Located in Arnhem, near the German border.

In Germany a defence line already existed in the west along the border with Holland, Belgium and France. The Westwall. After British raids in Norway and France, directives were issued in 1941 for coastal defence of the occupied territories in Europe (Norway, Denmark, Germany, Holland, Belgium and France). Meaning that the coastal regions of these countries were to be fortified with separate defence units of Navy and Air Force, supported by the Army. The defence units were placed direclty along the coast and deeper inland, giving the region it’s depth, so all units could cooperate and support each other as a whole. In comparison to the older Westwall which was a continuous line of static defences, the Neue Westwall was therefore very different.

The regions along the coast were devided into specific areas known as Küstenverteidigungsabschnitt (KVA, coastal defence area), and the areas were subordinate to the high command choosen for that specific area. In the beginning of ’42, defence units were given terms. These terms referred to the strategic importance of the area to be defended. They were Widerstandsnest (WN, resistance nest), Stützpunkt (StP., strongpoint), Stützpunktgruppe (StP.Gr., strongpoint group) and Verteidingsbereich (VB, defensive area). At the time construction programs for fortifying coastal regions were already been carried out, although not on a massive scale. Light and heavy bunkers were still being build with designs of the older Westwall period, although new designs were introduced.

After the Allied raid of Dieppe (F) in August 1942, it became clear that the improvement of the New Westwall was needed. Several meetings of the German High Command resulted in orders for the increase of coastal defence, the protection of important areas such as ports and naval bases, the use of camouflage, weapons, armor parts and obstables, and even the introduction of new german bunker designs for Army, Navy and Air Force. Aim was for building a total of 15.000 bunkers, which could accomodate the men protecting the coasts of Europe. The Atlantikwall programme was born. But in the end of ’43, increasing Allied attacks led the Germans to the believe that an invasion was coming.

This development forced the Germans to increase construction capacity and to increase the defence of the beachlines with obstacles. New designed bunker types were also introduced for different ways of coastal defence. The term Festung (Fortress) was also introduced for a select group of area’s, designated to resist the offensive, the defenders were ordered to defend them at all costs. All together boosted the Atlantikwall programme with more then 11.000 constructions finished by May 1944. In the end a total of 4 construction programmes were launched between October 1942 and October 1944. The French Mediterranean coast between the border of Spain and Italy, somehow did not receive the same treatment as the coast between Norway and France.

As said, the French Mediterranean coast did not receive the same treatment as the Neue Westwall between Norway and France. One of the reasons was because of the fact that the coast during the war was devided in a German and Italian part. The German sector took part in the construction programmes, the Italian part did not. Only in the end of 1943 the Germans had full control over the entire coast, and increased building capacity from that point. Nevertheless, armoured turrets and steel parts for infantry bunkers were not available, and the majority of fortifications remained constructed in a lighter degree. You can say that the Mediterranean coastal front (Mittelmeerküstenfront) just was not shaped in the way that it’s counterpart was on the other side of France and therefor, never reached the same status as the above ‘Atlantikwall’.

A part of German bunkers and supporting structures were build on and around small and langer airfields. Because the airfields were not situated directly at the coast most of the time, they were not integrated in the coastal defence. But because of the importance of airfields for the German Air Force, they too were heavily defended by anti-aircraft batteries and infantry strongpoints. Anti-aircraft batteries, infantry positions, radar stations, aircraft hangars, supportive buildings and infrastructure making airfields interesting as a whole; a separate page worthy. 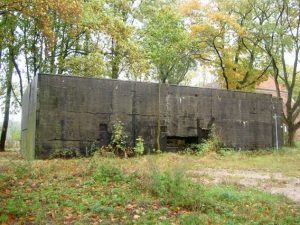 For communication between the strongpoints along the coast and the hinterland, it was important to have a stable network of telephone lines (Festungs-Kabelnetz). Existing lines were reused, extended and improved by the occupier. The positions where the lines came together were vulnerable, and needed protection. In order to protect them a range of special designed bunker types were introduced for this duty. Although many of these bunkers are destroyed after the war, they still are an interesting part of fortification history.

All the information on this website is published in good faith and for general information purpose only. Stahlbeton.nl does not make any warranties about the completeness, reliability and accuracy of this information. Any action you take upon the information you find on this website, is strictly at your own risk. Stahlbeton.nl will not be liable for any losses and/or damages in connection with the use of our website. Stahlbeton.nl and its author does not have any connection with second and third partys, and is only made for individuals who are generally interested in WWII, and specifically in German fortifications. All rights reserved.

From our website, you possibly can visit other websites by following hyperlinks to such external sites. While we strive to provide only quality links to useful and ethical websites, we have no control over the content and nature of these sites. These links to other websites do not imply a recommendation for all the content found on these sites. Site owners and content may change without notice and may occur before we have the opportunity to remove a link which may have gone ‘bad’.

Please be also aware that when you leave our website, other sites may have different privacy policies and terms which are beyond our control. Please be sure to check the Privacy Policies of these sites as well as their “Terms of Service” before engaging in any business or uploading any information.

Should we update, amend or make any changes to this document, those changes will be prominently posted here.