In Europe the Luftwaffe had an enormes network of airfields, obtained by occupation. After occupation the German Air Force immediately began with the improvement of excisting airfields, specially the hardening of the landing strips. On all airfields buildings were being build for a number of special tasks. Furthermore workshops for maintenance, ammunition and fuel depots, camouflaged shelters and even large, village like camps for the accommodation of crew were introduced.

The airfields were different in terms of function, the biggest airfields capable of housing a large number of bombers and fighter planes, making them specially suitable for the offensive (Fliegerhorsten). Because of missing hard landing strips, the middle size bases were unsuitable for heavy bombers, and therefor only stationed fighter planes for defensive purposes. The smallest airfields did not have an offensive or defensive task.

During the Battle of Britain, mostly the airfields in Holland, Belgium and France were used by the Luftwaffe. In Holland and Belgium mainly bombers were active in the air war around England. From  airfields in northern France fighter planes flew their missions, because of the smallest distance between France and England. Despite all efforts The Battle of Britain was lost by the Germans, and with this, the Luftwaffe also lost her air supremacy.

In the following years the improvements on their airfields were coming to a hold, and resources were used on other fronts. Eventualley Germany lost the war and years after this period, a lot of the former German airfields became playing a role during The Cold War. At this moment these airfields are in use again as a militairy or civil air base, and some are abandoned, but they are all still very interesting because of the historical traces that can be found on and around these grounds. 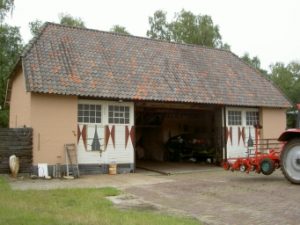