For communication between the resistance nests and strongpoints along the coast and the hinterland, it was important to have a stable network of telephone lines (Festungs-Kabelnetz). Therefor, in all occupied European countries the existing lines were reused, extended and improved by the Germans. Most of the time, the lines were situated undergrounds but at the intersections where lines came together, it became an above-ground situation. These points were of course very vulnerable and needed protection fast.

In order to protect them a small range of special designed bunker types were introduced. These concrete constructions were placed at the intersections, and even near some local post offices you could find them. The designs of these so called cable switching bunkers (Kabelschaltbunker) were different in terms of shape and dimensions; the smallest version was a square shaped cable pit (Kabelbrunne), followed up by a bigger above-ground version (Kabelschaltstelle) and the biggest version fully designed and equipped according to fortress standards (Großschaltstelle).

Many of the bunkers which were part of the telephone exchange network are destroyed after the war, or hidden below the surface, but for us still an interesting part of fortification history. 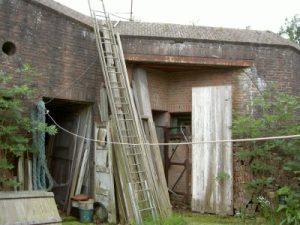